Rare are the days that you can open your social media channel of choice and not be faced with a topic that forces you to pick a side. Without even venturing into the world of politics, we are bombarded with opinions on if a Christmas song should be banned and if homophobic tweets should cost someone the opportunity to host the Oscars. Political correctness has become a villain to some and a rallying battle cry to others. Whatever the topic, don’t be fooled, these posts are meant to divide us.

We as humans are a tribal species. We need to belong. Even the non-conformists associate with other likeminded people on the fringe. All these posts that seem as innocent as making fun of the pumpkin spice latte drinking basic white girl are meant to separate people into US and THEM and ultimately RIGHT and WRONG.

For those of us that work with people who are lumped too often in the “wrong” column, the war on political correctness can get our hackles up. It’s one thing to make fun of my choice of eating avocado on toast, it’s another to make fun of a person who is born a certain way. Poking fun at the gluten-free diet is cute until it’s the only life-saving option of a child with an autoimmune disease like Celiac Disease.

It seems simple enough at first. Political correctness means to treat and speak of all human beings with dignity and respect regardless of their race, gender, sexual orientation, health, creed, religion, age or ability. So, what’s wrong with that?

Those in the against camp feel that the overreach of political correctness is impeding on free speech and costing innocent people their careers (or art) when things are taken out of the context of time and place. And they are not always wrong.

However, there is a new popular narrative that says people just can’t take a joke anymore. That we all need to just lighten up and not be so quick to feel offended… or feel at all. But, when I hear those words it rarely comes from the mouth, or keyboard, of the oppressed. Sarcasm has long been considered veiled hostility and gaslighting is a favorite tool of the bully.

I decided to write this blog when a family friend (an Anglo-Saxon, Christian, white, middle-class, man) shared this meme on his Facebook account. He knows my son very well and is aware he is transgender. Yet, I can only assume he saw this as just a funny joke. In one fell swoop, this casual share on social media made it wrong to be respectful of people of colour, Muslims, gender diversity, and people who care about the environment. 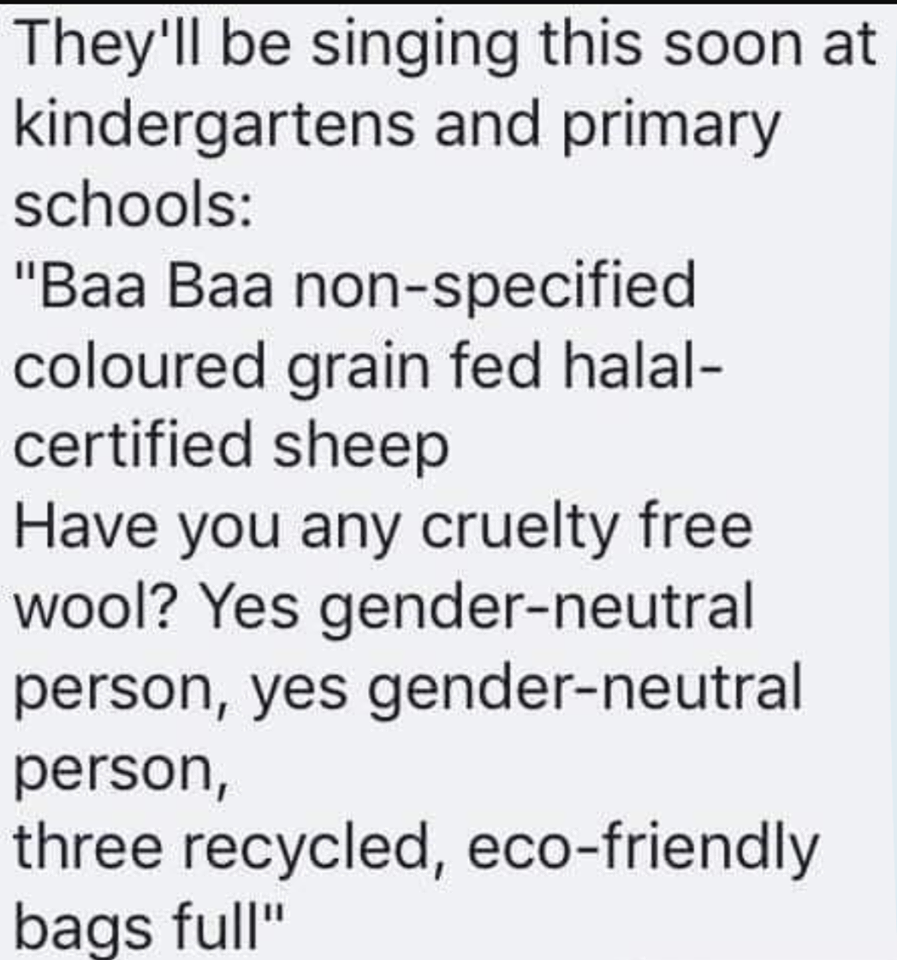 If I try very hard, I can see how a privileged white man can find that funny. I can also see how a closeted youth can find it devastating. There are people in our society who are desperately trying to come to terms with who they are on the inside. They are mustering the courage to tell their parents or a teacher or a best friend that they are different. They hopelessly want to know that they are okay, that they matter, and that they will be accepted despite their differences. When they see memes and jokes poking fun at their deepest reality it pushes them farther into the closet and deeper under a blanket of despair. It also tells them who they cannot trust with their reality.

It saddens me that people are so starved to hang on to their privilege, so desperate to belong to the cool tribe, that they’re okay with throwing someone else under the bus to hang on to the good old days.

My challenge to you, the next time you are tempted to share a post on social media that pokes fun at a group of people, take a second and ask yourself if you are sharing it to make yourself and your tribe right, or make the others and their tribe wrong.

2 thoughts on “When the Joke isn’t Funny”